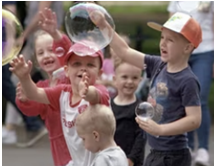 What’s so special about the three-to-seven age group? 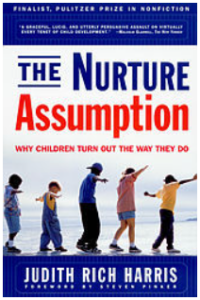 According to new research on the relationship between play and mental health (see September newsletter), ‘children’s social play competences at age 7 significantly predicted lower levels of internalising and externalising problems at age 11’.

This pronouncement sent me scurrying to the bookcase for The Nurture Assumption by Judith Rich Harris, to check out something she says about evolutionary biology. It’s this: since human children were reared in tribal societies for upwards of 250 millennia, the child-rearing practices of such societies must’ve had a significant evolutionary impact on human biology.

Harris describes how mothers in tribal cultures care for their babies twenty-four hours a day for at least the first two years. Sometime in the third year, the baby would be weaned, often quite abruptly, because mum was pregnant again. When the ‘old baby’ was supplanted by a new baby at the centre of mum’s existence, s/he would be handed over to a ‘playgroup’ of other children.

There’d probably be few children over seven years old in the playgroup because they’d be old and responsible enough to carry out simple jobs for the family and tribe, like watching the cattle or fetching water. So while mums, grannies and aunties would obviously keep a weather eye on them, the three-to seven-year-olds would be reared (for four years which we now know are critical for brain development) by a gaggle of their tribal peers. 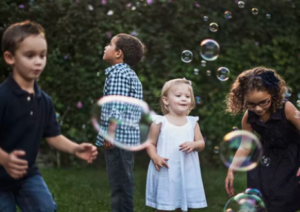 The transition from apple-of-mum’s-eye to lowest-of-the-low in the playgroup would probably be pretty traumatic but, as Harris points out, by this age the drive for social play is extremely strong so there’d be plenty of motivation to learn the ropes. She includes the following quotation from a German ethnologist who studies contemporary tribal societies:

’The older ones explain the rules of play and will admonish those who do not adhere to them … Initially the older children behave very tolerantly towards the younger ones, although eventually they place definite limitations on behaviour. By playing together in the children’s group the members learn what aggravates others and which rules they must obey.’

The nurture of children

The more I learn about the development of socio-emotional skills, the more convinced I am that the three-to-seven age group is primed by evolution to help ‘bring itself up’. Little children in these playgroups learned from the big ones. And the big children honed their capacity for social responsibility by caring for the little ones. It would be quite gratifying for the six-year-olds to have wee apprentices looking up to them – and, of course, if they didn’t perform their caring function with reasonable success, there’d be hell to pay from the mums, grannies and aunties.

Our culture is so far removed from tribal societies that it’s tempting to dismiss such customs as irrelevant. There’s so much for children to learn these days and so many technological shortcuts to information. But as science makes clear, there are no short-cuts in biological development. 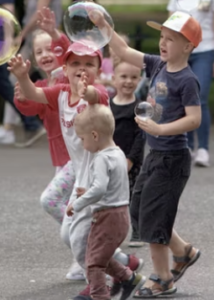 In terms of socialisation, for instance, babies through the ages have learned basic social skills by imitating adult carers but by two or three years old they’re ready to practise the skills with other children during active, social, outdoor play.  That’s where they learn how to make friends, avoid enemies, deal with fall-outs, follow rules, communicate about shared projects and discover how best they personally can contribute to  the group.

Social skills are, of course, entwined with many other aspects of socio-emotional maturation, such as emotional resilience and the capacity to regulate one’s own behaviour. And they’re all intrinsically linked to physical development, as children learn to control and coordinate their bodies, assess risks in their play and – when this assessment proves wrong – pick themselves up, brush themselves down and become just that little bit more emotionally resilient. All this activity also overlaps with cognitive development, as embodied experiences are turned into abstract memories that can be communicated in words. Development is a holistic process, and we 21st century adults forget that at our peril.

The social advantages of kindergarten

In traffic-clogged 21st century streets, it’s impossible for parents to let the three-to-seven age-group play outdoors alone, so it’s up to the state to make up for the loss.  Two hundred years ago, Frederick Froebel provided a wonderful blueprint for early learning and care in his ‘kindergarten’ system but the UK, with its devotion to an early start on formal schooling, has failed to build on this.  That’s why Upstart looked north for contemporary models of effective childcare practice.

Re-reading Harris’s book reminded me of my first visit to a Finnish day-care centre. It was back in 2004 when Health & Safety Fever was at its height in the UK so I was astounded that the children were free to play in the extensive outdoor area at any time, with no adult supervision.  My Finnish host was bemused by my anxious enquiries. ‘But if there is an accident, the children will tell us,’ she said. 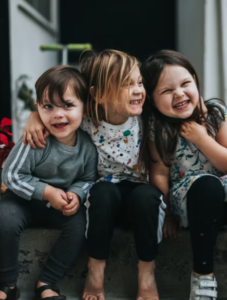 She also told me there was one rule children must follow before pursuing this outdoor freedom: they had to change into appropriate outdoor clothes (puddle-suits and sturdy footwear) without adult help. For the three-year-olds, this seemed a big ask. But I soon noticed that the older children did the helping.

If Scotland wants its young people to be ‘confident individuals, successful learners, effective contributors and responsible citizens’, we must learn from Froebel, the Finns, and their tribal antecedents. The four Curriculum for Excellence capacities develop, in the early years, through play. And the social side of early play is greatly enhanced by mixed age groups – known in educationese as ‘vertical grouping’.

Kate Johnson and I give some suggestions for facilitating vertical grouping in modern-day Scotland in our chapter in Play is the Way: child development, early years and the future of Scottish education. We’d love to hear from any schools or settings that are experimenting with ways of bringing three- to seven-year-olds together, and thus allowing human biology to weave its ancient magic.