It’s striking to see how enthusiastically people are already being drawn to the Upstart Movement. The campaign is clearly tapping into a frustration that is lying just below the surface for many parents and staff. When they hear the case being made by Upstart, it seems straightforward to them: “Yes, our youngest children need more play.”

So what is the problem? Why does the case not seem obvious to the rest of ‘the everyone’ in Scotland? Why does the call for more play sometimes turn into a kind of battle?

Here’s my answer: We are still a Presbyterian culture, here in Scotland. Deep in our cultural psyche, we remain a bit suspicious of play. We don’t really trust it; we don’t esteem it; we don’t rate it. In fact, it makes us a bit nervous. Play doesn’t seem serious enough. It doesn’t seem earnest enough. Play is the thing you do when all the important stuff is done, when the work is finished, when you can take a bit of time off. Play is the frivolous stuff at the end of the day. 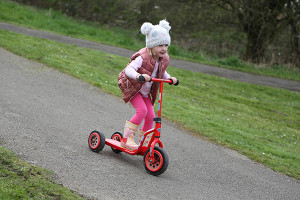 I know that phrases like ‘learning through play’ have become popular in educational circles. I celebrate that shift. But such phrases ultimately serve to justify play. They explain to doubters why play is valuable. They legitimate play as worthwhile, because it leads to something else: learning. Such phrases reassure skeptical adults that a child at play is engaged in a respectable activity. “Relax, that youngster is actually learning – it only looks frivolous.” Our 21st century Scottish mindset somehow finds it difficult to conceive of learning and play as the same thing.

Would we be comfortable, as a culture, if our government started spending money on educational establishments where the motto was ‘play for play’s sake’? My guess is that we wouldn’t have cultural faith that that was a good enough investment of our taxes.

Take for instance the Play Talk Read bus. I love watching the giggling that goes on between parents and children inside our purple busses, funded by the Scottish Government. But it isn’t the Play Talk Laughter bus, is it? Voters are willing to have the government fund the programme because the word Read appears in the title. The existence of those busses depends on the inclusion of that single word: ‘Read’. 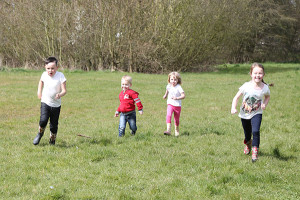 It may be helpful, then, to remind ourselves how far back the fear of frivolity goes. It can probably be tracked back at least to the 16th century and John Knox’s Protestant Reformation. But for now, let me go back ‘only’ to 1844, to one of the country’s most charismatic speakers, Reverend Robert McCheyne. When McCheyne died at the tender age of 30, his good friend Andrew Bonar published a glowing biography about him. Here is what a reviewer of the time had to say about that biography and about McCheyne himself:

“It is in burning and shining lights like Rev McCheyne…that we descry the dawning of Scotland’s better day….[He shows us] that good Christians enjoy such habitual peace as to have no need for levity. They are filled with such deep gladness that it does not readily effervesce into riotous glee….Their frisky imagination is not forever bolting aside or running away.”

That’s precisely the problem with children! When you let them play, their frisky imaginations are forever bolting aside and running away with them! Play puts children at constant risk of giving themselves over to levity and descending into riotous glee!

I know that, since 1844, our culture has largely given up our Christian identity. But I don’t think we have given up our fear of frivolity.

Just in case you think that I am over-exaggerating my case, swept away by the delightfully archaic linguistic expression of the 19th century, it may be useful to know that Bonar’s biography proved hugely popular. Within 25 years, it had gone through 116 English editions. Some commentators proclaimed that “few books have been better loved”. By 1910, half a million copies were in circulation.

Now…take a guess as to when the most recent edition of McCheyne’s biography was printed. The surprising answer is: in 2015. You can purchase a shiny new paperback copy from Amazon, if you wish. Reviewers there describe the biography as “awesome”, “challenging me to make changes in my own life”, and “the story of a hero for our time”.