Zooming in the Footsteps of Giants 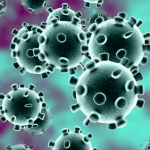 What’s your most vivid memory of the frantic week before lockdown? Mine is making the momentous decision to cancel Upstart’s national conference – In the Footsteps of Giants, Edinburgh Storytelling Centre, March 15th 2020 – which Kate Johnston and I had been organising for almost a year.

Quite apart from the enormous disappointment, the decision had serious financial repercussions. Upstart would lose hundreds of pounds in airfares and hotel bookings for speakers, plus the deposit on the venue and refreshments. And we’d have to refund almost 100 tickets – losing the money we needed to keep the campaign up and running for another year… So we swiftly changed our minds and merely postponed the conference till September. Surely coronavirus would be under control by then?

Maybe you too remember those early days when we thought it would be over by Christmas? Such innocent times… 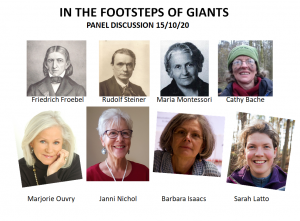 Anyway, sometime in June we realised the only way to avoid cancellation was to put Giants online. Upstart had by then had a Zoom Board Meeting and a Zoom AGM.  How difficult could it be to run four keynote presentations, five workshops and a final panel discussion, catering for up to 100 attendees, all over the course of a month and a half? It would be fun, Kate and I told ourselves bravely.  After all, as George Bernard Shaw said: ‘You don’t stop playing because you grow old – you grow old because you stop playing.’ In fact, there were times during the screening of the series when we felt about 150 years old … but now that it’s over, we’re so glad we did it!

To all of you out there who held on to your tickets, THANK YOU!  And to the people who snapped up the few tickets that did become available for the online version, THANK YOU too.  Upstart is still solvent! And we hope that – despite my incompetence with the technology – you found the series as fascinating and educative as we did.

Our keynote speakers were eloquent and hugely informative about the pedagogical principles of their respective ‘giants’. Our workshop presenters were brilliant at showing how these principles could be put into practice. We cannot thank them all enough! And my head’s still buzzing with the amazing panel discussion broadcast last night. Although Giants Online couldn’t possibly have the same electric buzz as a real conference, there were many advantages to having access to all this scholarship spread over time, and the option to revisit sessions via the Zoom recordings.

The original idea for Giants was Kate’s.  As she says, if you want high-quality early childhood education, all the adults involved need a firm understanding of the pedagogical principles on which it depends. Giants gave us the opportunity to hear about – and reflect on – the principles underpinning the philosophies of Froebel, Steiner, Montessori and Cathy Bache’s Secret Garden (which was the first nursery in Scotland in which children are out in the woods all day). 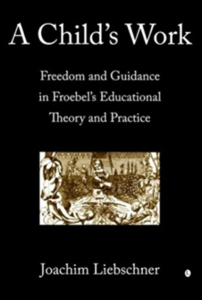 It’s been a heady few weeks from which I’ll carry a number of important phrases with me into the future.

First is Froebel’s injunction that, for children, kindergarten means ‘Freedom with guidance’ – and Marjorie Ouvry’s reminder that this adult guidance must be based on ‘respect for the children and observation of their play’.

(Incidentally, did you know that Froebel was the first person ever to suggest that women should be trained as teachers? When he proposed this at a conference, his words were drowned out by jeering male professors.) 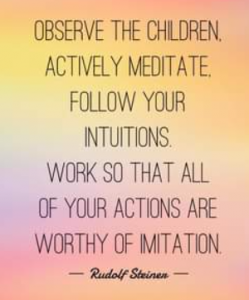 Then there’s a wonderful phrase from Rudolf Steiner. He said that early years educators must be ‘worthy of imitation.’ If we could all manage that, imagine how calm, focused and happy all early years settings would be.

(Apparently, Margaret McMillan was a big fan of Steiner. She helped organise the two conferences about his work in England and said ‘I have found my leader in Rudolf Steiner.’)

I loved Barbara Isaacs’ summing up of Montessorian principles as ‘respect for the child and trust in the child’s capacity to learn’. She added that ‘adults who work with children must be curious, like children.’

I’ve just noticed that my two bits of parenthetic gossip about Froebel and Steiner both refer to women. It’s great that, from Montessori onwards, most of the early years Giants are female. I wish feminism would celebrate them more. It was fascinating to learn that Montessori was involved in the setting up of UNESCO – what a woman! 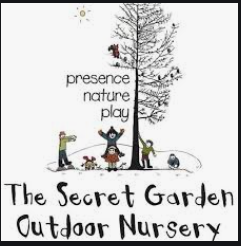 Finally, there are the three words that convey the philosophy of the Secret Garden: ‘Presence, Nature, Play.’ What a terrific recipe for ‘education and care for environmental sustainability’, which all 21st century early years pioneers must surely rate as a hugely important part of their duty to the children.

You can find out more about the Secret Garden in Upstart’s forthcoming book ‘Play is the Way’, which we hope will be published in November.  Sarah has written a lovely chapter about how the nursery works, and how – thanks to flexi-schooling – it now caters for many five- to seven-year-old children as well as the nursery age-group.  When I asked her how she persuades primary school head teachers to let children attend the Secret Garden for one or two days a week, she said that as soon as they’ve seen the children learning out in the woods, they have no problems with the arrangement at all.

Kate and I hope everyone who joined the Giants Online sessions, either on the night or by watching the recordings, found them as inspiring as we did. Please let us know what you thought via Facebook, Twitter or info@upstart.scot.  Perhaps, sometime next year, we’ll be able to have a real life conference again… but, in the meantime, I hope Upstarts will soon meet again courtesy of Zoom!